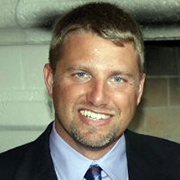 Upon graduating from Middle Tennessee State University in 1995, Chris immediately became involved in the transportation and logistics industry beginning his career with US Express, a premier trucking and logistics management company in Orlando Florida. As the Domestic Operations Manager he was responsible for over $3 million in sales revenues.

After three years in the domestic transportation market, Chris was offered a position with PMG Worldwide as the Domestic Shipping and Operations Manager. He was soon also running the international logistics for the company and promptly named General Manager and Vice President of Global Operations. His responsibilities included expanding the client base with companies that included Campus Crusades, Walt Disney world, and Harris Corporation.
Over the next five years Chris honed his sales and operational skills in both the domestic and international markets with Adcom Worldwide, as Vice President of Operations and with Xpress Global Systems as a Regional Sales Manager.

As Co-founder of Installation Service Group (ISG), Chris has developed innovative ways to control the assets and streamline the supply chain for clients in hospitality, construction, design, procurement, and healthcare industries. The foundation of his belief is to better his client’s projects and the industry one lives within.